This week, the theme for Wanderer's Thursday Movie Picks is Period Dramas. If you're not familiar with this activity, it's pretty straight forward. Each week, Wanderer over at Wandering Through the Shelves has a theme that gets posted on Thursdays (hence the name). Based on that theme, participants are expected to choose three movies and include roughly a paragraph on why they chose them. Pretty straight forward in theory, although sometimes is can prove more challenging than you expect.

Of course, "period drama" is a fairly broad term that could encompass a number of different films making this list slightly trickier to assemble. The obvious definition of a "period drama" would be a dramatic narrative set against the backdrop of a specific period of history, but this could encompass a wide range of sub-genres set across different eras. Probably the most obvious one would be the "costume drama"- elaborate melodramas (often romances) that make a huge spectacle of their selected era, (often somewhere in the late 18th or early 19th century, or sometimes adopting a Victorian/Edwardian setting). Typically the big thing you expect to see put on display is the fashion trends of the period (or at least those of the upper class- you don't normally see costume dramas about the poor). Depending on who you ask these are either examples of fine art or overly pretentious. Or somewhere in the middle.

Another sub-genre would be the "sword and sandal" films- big-budget historical or religious epics, many of them set in Ancient Rome. This type loves to make a spectacle of its setting (expect to see lots of Roman architecture), and may incorporate lots of special effects. We could also point to any number of war films that dramatize historical conflicts, such as the innumerable range of dramas about World War II or the Vietnam War. Certainly any drama set in the Victorian period would qualify.

Literature is also a common source material for period dramas. The romances of Jane Austen, for example, seem to be a popular choice.

So for the purposes of this theme, I had to come up with a selection of period dramas. Since it was a broad topic it was hard to narrow it down to just three. I did eventually manage to come up with three after filtering it down from a lot more, and produced the following selection. Plus an unexpected bonus. 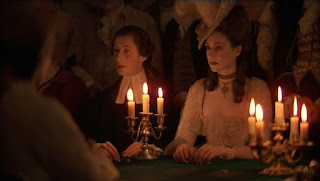 Technically, several of Stanley Kubrick's films could be classified as "period dramas." Certainly Paths of Glory and Spartacus, and even Full Metal Jacket, but Barry Lyndon has a way of standing out. In the 1970's Kubrick took on the ambitious project of trying to make a biopic of Napoleon Bonaparte. A lot of what he did accomplish was quite impressive. The amount of research Kubrick had managed to do was alone impressive. He was going to go above and beyond. He had everything figured out. It was an ambitious project for sure, but if anyone could pull it off it was Stanley Kubrick. Then just as he was about to start filming, another Napoleonic film came out bombed. As a result, the investors panicked and pulled Kubrick's funding.

But while they may have deprived us of seeing what might have been the greatest biopic of all time, Kubrick did manage to take his extensive work on Napoleon and put into his next project- his underrated 1975 period piece Barry Lyndon. Based on a popular romance novel, Barry Lyndon follows an 18th century rogue who gambles his way into the aristocracy and gains just about everything he could possibly want, only to eventually see it all come crashing down (that's not a spoiler by the way, you're literally told from the beginning how it's all going to end). As far as costume dramas go, it's pretty well made.

Perhaps the most famous story about this film is one of Kubrick's more unusual decisions. For the indoor scenes, Kubrick was very adamant about using actual candlelight. It took a specialized camera normally used by NASA to make that possible, but it was worth it. 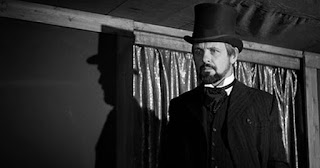 David Lynch's second feature film was a Victorian drama inspired by the real-life Joseph Merrick (referred to here as "John" due to a peculiar choice in the source material), the titular "Elephant Man"- a man who gained a great deal of attention from the medical world due to his unusual medical condition that puzzled doctors of the time, and which to this day experts still try to diagnose without success. They even got an actual cast of Merrick's head to use for the makeup job on John Hurt.

The Elephant Man brings to the forefront two aspects of Victorian society. It provides a thorough look into the British medical scene, offering a glimpse into the life of a doctor at the time, but perhaps more obviously it brings up the less glamorous subject of "freakshows". This is a once-common practice where circuses would gather "freaks"- people with weird physical quirks whose bodies would be put on display to be met with fascination and discomfort by their audience. The Elephant Man has a very cynical view of freak show exhibitions, and their tendency to exploit the misfortunes of others for profit.

Now some would argue that freak show acts actually helped a lot of people who otherwise wouldn't have been able to make a living (contrast this with a film like The Greatest Showman, which emphasizes how a lot of people with deformities were generally marginalized at the time and how circuses were basically the only career paths available to them). While this angle isn't discussed much in The Elephant Man (if at all), it does show the problematic society that marginalizes people with conditions over which they have no control, and certainly questions the ethics of using a human's deformities for entertainment. In fact, one of the big questions of the film is whether Treves is actually making things better for Merrick or if he's just created a whole new circus. 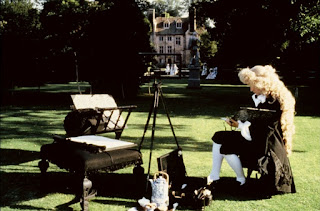 As one of my professors once remarked, this probably should have been called The Draughtsman's Contracts because it's a major theme and there are at least two important contracts he takes (three if you count the "contract" at the very end). Peter Greenway's period drama revolves around an 18th-century sketch artist who is hired to produce drawings of a British estate, while also entering deals that involve sexual affairs with two upper class women. Oh, and there's a murder which may or may not have its solution in said drawings (it's a bit confusing). There's also a naked man who often pretends to be a statue and keeps appearing in various parts of the estate for reasons never made entirely clear. This film can certainly be described as "weird" but it does a pretty impressive job with the period detail. 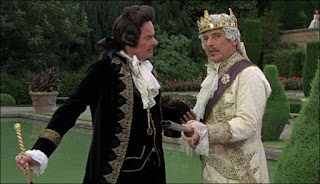 I thought that while we're on the subject of "period dramas" it would be fun to also include an underrated film that parodies the genre. Mel Brooks' take on the period drama is an anthology that ruthlessly mocks various types of period dramas, both historical and religious.

The two main sections include a mock "sword and sandal" epic that follows the adventures of a "stand-up philosopher" in Ancient Rome, and a mock costume drama about the French Revolution. The film also has a segment depicting the "Dawn of Man" which includes a parody of 2001: A Space Odyssey and a chronicling of early human discoveries such as the spear, fire, the first marriage (and first homosexual marriage), music, and art (which also caused the birth of the critic). And of course we can't forget the bizarrely cheerful song-and-dance number about the Spanish Inquisition.

Mel Brooks himself plays several different people over the course of the film (even having a dual-role in the French Revolution segment), but quite a few other big names also make appearances. Several of Brooks' regulars manage to find their way in- Madeline Kahn, Harvey Korman, Dom DeLuoise, Ron Carey, Chloris Leechman, and Sid Caesar all show up. Other surprising appearances include John Hurt, Bea Aurthur, and dramatic narration by Orson Welles.
Posted by John Hitchcock at 19:17