So What is the Deal With Soviet Montage Cinema Anyway? 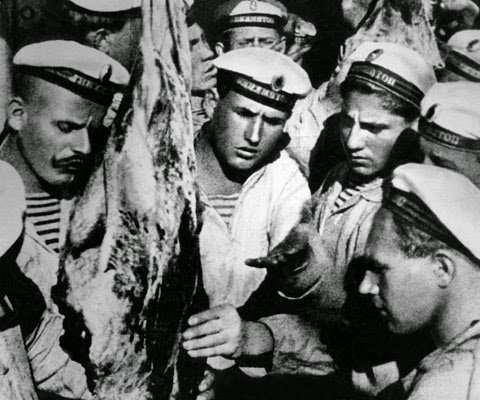 That was certainly a question I was asking about a week ago. At first glance after sitting through the less than pleasant experience of Vsevelod Pudovkin's Mother I was left wondering what was so special about this obscure but crucial part of film history. It didn't seem to be a whole lot different from what people like Griffith were doing at the time, but it turned out I had to look a little deeper. While it was technically the work of several different people working simultaneously on different projects, they all built on what came before in more ways than one.

The whole history of film can be looked at as different people building up on each other's accomplishments over periods of time. It starts with the old-fashioned magic lanterns. One day Edward Muybridge figured out how to record a live action by using multiple cameras at once, followed by Étienne-Jules Marey coming along and figuring out how to combine all the cameras into one machine and Thomas Edison figuring out how to record images onto celluloid. The Lumière brothers come along and begin exhibiting their recordings of everyday activities which in turn inspired Georges Méliès to come along and begin experimenting with early editing techniques. Porter came along and experimented with slightly more advanced techniques and other filmmakers followed suit. Then D.W. Griffith, himself a director of shorts, went on to make his ambitious feature Birth of a Nation.

It can also be seen in other forms too, another big one being the different movements that affected many films on a technical level. German Expressionism, for instance, was a movement that didn't last very long and had barely a handful of films that few people wanted to see but still became a strong influence on other filmmakers. In fact, old fashioned Hollywood film noir owes something to the German Expressionist movement, something probably helped by the fact that a lot of Expressionist directors later went on to use their skills in Hollywood.

Soviet Montage is a bit of both, technical in what was discovered during its time but also a movement in that it contained several different people. Many of these were young filmmakers who were inspired by Hollywood films and fascinated by the then-revolutionary idea of continuity editing which was (and still is) employed in the majority of American films. Putting it simply Griffith was the man who pioneered the idea of using edits to create continuity , and to an extent that is used in Soviet productions, but these pioneers took it one step further.

Though Russian films did exist at the time, they had to make due in large part with imports. I won't get into the complicated politics surrounding it but the local films produced at the time were largely filmed plays. The camera would be placed at one point with an entire scene happening in a single shot, much like the films of Méliès. Due to the political turmoil affecting society film stock was hard to come by, and a lot of early filmmakers had to resort to recording on used film and editing imported movies. However these early projects did allow the groundwork to be set for major Russian productions.

One of the most famous Russian filmmakers of the time was Lev Kuleshov, a filmmaker who conducted a series of experiments in which he attempted to see what effects he could achieve through different types of editing. The one that is best remembered resulted in the "Kuleshov effect" and worked quite simply. The film consisted of a still image of a man's face, which would then be cut together with different images such as a bowl of soup, a dead child, and an attractive woman. I'm not entirely sure if this is the original print or a later filmmaker experimenting with the same technique, but either way it should give you an idea:


The result of this experiment was to see what emotions were generated by the audience. They found that the man seemed to express hunger when looking at the soup and sadness when looking at the coffin. The best part? It was the same face every time. The actor gave off a blank expression but when juxtaposed with other images viewers began to project their images onto the film. This experiment revealed two things about editing. First, it could be used not just as a way to establish continuity but also to create emotion where there was none previously. Second, it could create the illusion of space that doesn't exist; in this case audiences assumed that the man was in the same location as the various things he was supposedly looking at.

Kuleshov's experiment was a major stepping stone, but it was another man by the name of Sergei Eisenstein who would take it to the next level. It's not hard to see Eisenstein's influence on later artists. In fact you don't even have to look at his films, just seeing photographs of him shows you just how much he may have inspired other people and not even just filmmakers. There's actually several photographs where he bears a remarkable resemblance to the character of Henry Spencer in David Lynch's Eraserhead.


What Eisenstein did is a whole other story, though. Kuleshov worked out how editing can be used to generate an emotional response from the viewer, but Eisenstein realized it went a little bit deeper. He developed a theory that he could piece together two contrasting images with very different meanings to create a third, brand new meaning that did not previously exist. By doing this, he could create emotions through editing alone.

At the time, this process was known as "montage", which can be a bit jarring to viewers familiar with its more modern usage. However, is that not what contemporary montages ultimately aim to achieve? The "gearing up" montages you see in action movies or the training sequences in martial arts films essentially do the same thing, if on a smaller scale. In those cases, they use editing to excite the viewer. In that sense, many modern Hollywood productions owe a great deal to these old Soviet Montage films.

So ultimately, the big question is why it was the Russians who worked this out? Why not Hollywood (where they that had already been using continuity editing for some time) or Germany (which ironically, despite being more or less bankrupt after World War I, had one of the most successful film industries in the world)? The answer has to do with the messages often found in these old movies.

One of the key factors, perhaps the most important influence on Soviet Montage Cinema, was the circumstances that motivated its filmmakers. Russia was in a state of political turmoil, having just come out of a revolution. Vladimir Lenin had noble intentions but his means were somewhat questionable, and the result was a violent bloodbath that ended with the slaughter of not just the Tsar but also his entire family (and before you bring it up, the urban legend about his youngest daughter Anastasia escaping the massacre has been officially debunked). This led to a period of chaos as the Russian people struggled to rebuild, unfortunately making way for Joseph Stalin to come into power and make things even worse. 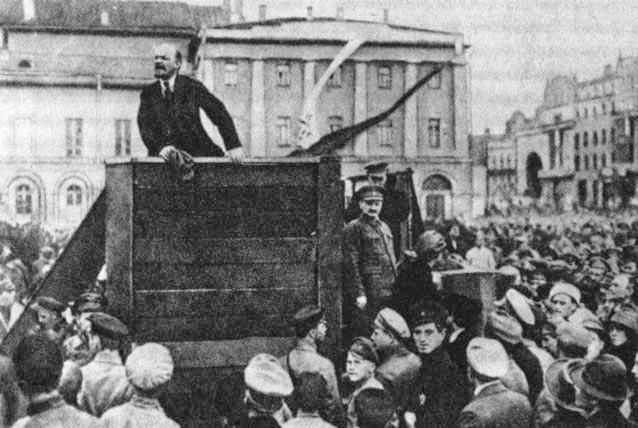 Propaganda was a key factor in driving the success of the revolution. The famous story of Grigori Rasputin being shot, stabbed, poisoned, and drowned only to later be found to have died of hypothermia while trying to claw his way out of the ice never happened. In actuality, Rasputin was only shot once and died instantly. The numerous failed assassination attempts were made up to make him seem less human and thus generate support for the revolution, and it worked so well that it was accepted as fact for decades before the original autopsy report was discovered.

The problem of course was that Russia was a very isolated community. Lenin wanted to appeal to the masses, but many people proved harder to reach than others. Film turned out to be an effective technique for promoting the ideology of the revolution. Even after it was over, the creation of propaganda films served not necessarily to support the revolution, but to justify it to the population. Though anti-Tzar films were not the only things produced in Russia at the time, they were at the forefront of their film industry.

While I wasn't particularly keen on this one film, Pudovkin's Mother is a great example of this ideology being reflected. This film takes on an approach reminiscent of the World War II combat films Hollywood would later produce, with themes of sacrifice. The Tzar's army is treated as inhuman and anonymous, with a group of characters bonding together. In this case it is the titular Mother gradually coming to join the common people in the struggle. In the end the Tzar's troops emerge victorious, but the film ends with the apparent intention of inspiring the viewer to take up arms and ensure that these people did not die in vain. 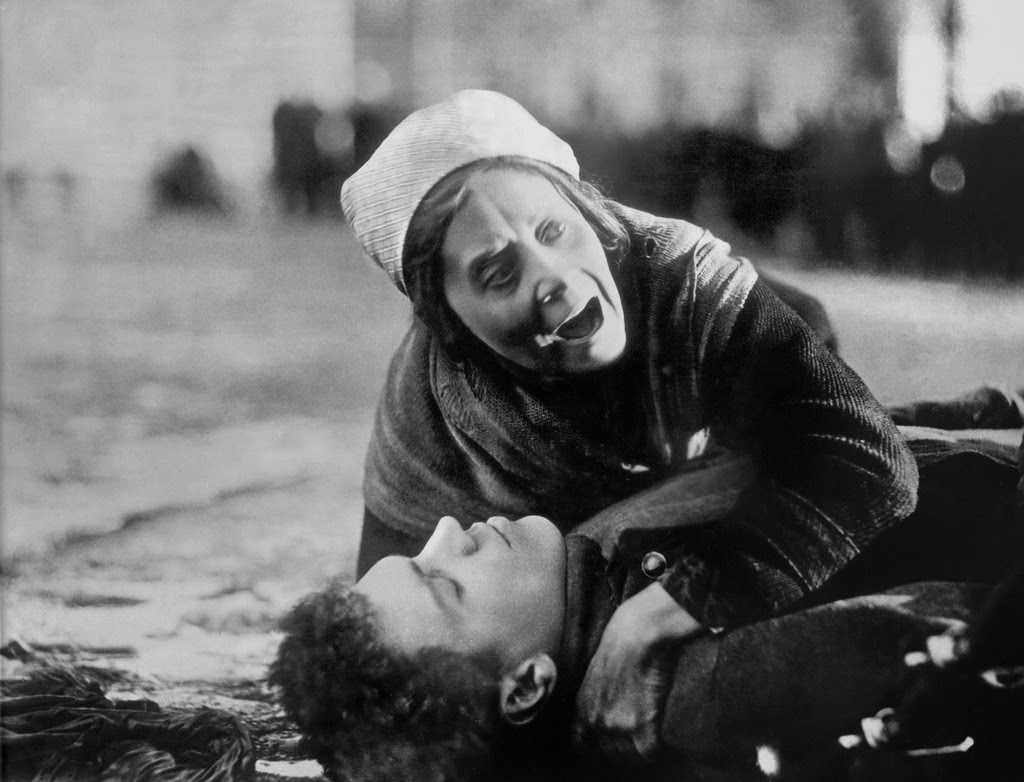 More effectively is Eisenstein's surprisingly good Battleship Potemkin, which creates an allegory for the struggles of the common people by scaling it down to a single battleship crew. This film was inspired by a real event (though I can't verify with certainly how close it is to what really happened), but represents the plight of the Russian people in the form of the mistreatment of the crew at the hands of their officers. One crew member then rallies the crew together and start a mutiny after which point they begin to inspire the people around them, beginning with the civilians in a nearby port and ultimately other ships in the Russian navy. 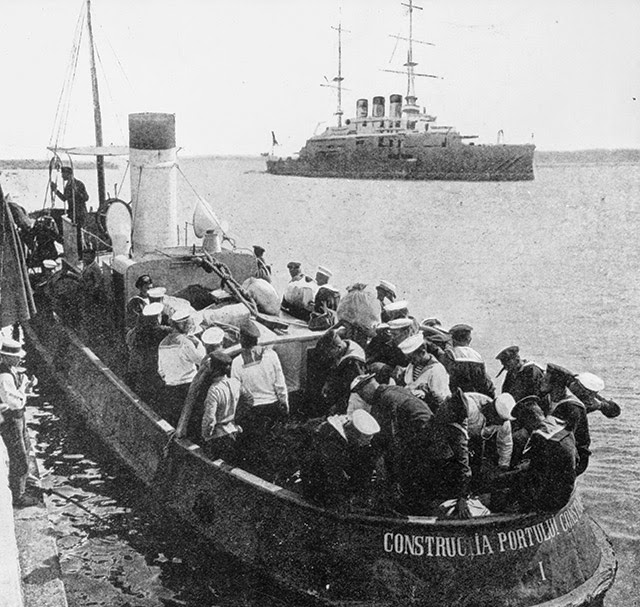 Curiously enough, Battleship Potemkin has no one true protagonist. It has several different characters who are given a degree of notability, but for the most part it is the collective proletariat masses that are cast as one protagonist. This is fitting to the ideas Lenin hoped to promote, as he aimed to unite the common people and to end the oppression of the bourgeois. Naturally, Eisenstein applies his techniques effectively with the intent to create this sense of anger and ultimately triumph as the brave men of the Potemkin set the way for a brighter future.

Much like Birth of a Nation, it isn't always easy to agree with what the ideologies that are promoted by these films. Personally, I can't begin to make a judgement call on whether the Russian Revolution was ultimately justified, seeing as my knowledge of the period is extremely limited. Still, the significance of these films cannot ultimately be denied. The period of montage brought out a number of filmmakers besides the ones I've referred to in this article, all of whom contributed something. Ultimately they took Griffith's continuity editing in directions he never would have imagined. Even after the movement ended in the 1930's, echoes of Soviet Montage can still be found in modern filmmaking, including mainstream Hollywood films.
Posted by John Hitchcock at 20:08